Home »
News > Outcomes of our Collaborating with the Crowd Event

Outcomes of our Collaborating with the Crowd Event

Outcomes of our Collaborating with the Crowd Event

Last Thursday we held our second official Epic Collaboration event, Collaborating with the Crowd. We designed the event based on some feedback from our launch event that some audience members would enjoy an accessible introduction to new ideas about collaboration, in a fun and interactive setting.

The event was sponsored by Hub Melbourne, who provided space and promotion, and was posted as an event on the Collaboratory Melbourne meetup.com group, with promotional support from Collaboratory organiser David Hood. You can read more about our intentions for the event in this post.

How we designed the event

On the night, we had about twenty participants, including the speakers and hosts. As planned, we ran a "digital world cafe" format, using short "lightning talks" as the inspiration for each round of discussion. 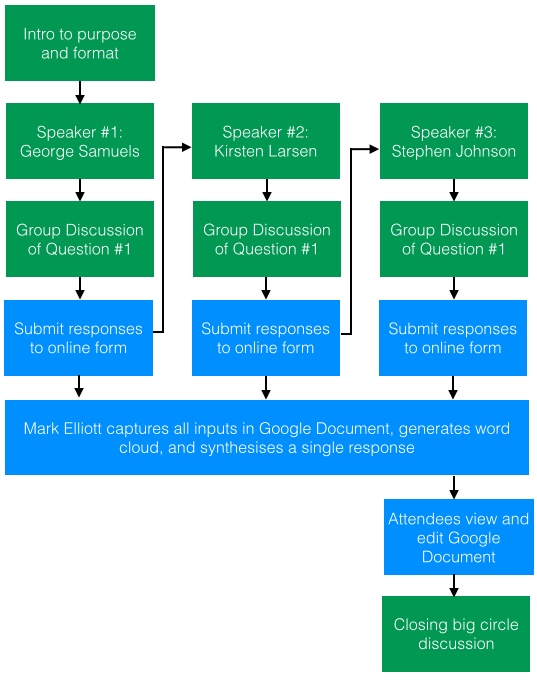 We didn’t say much about the process before the event, as we didn’t want to weigh people down with too many details. We took our time, however, to ensure that there were participants with smartphones or tablets in each breakout group, and that they could access the form. (Since the format requires only about 30% of participants to have smartphones, we were confident it would work in this context).

We used a simple slideshow to help guide the participants along, step by step, and provide them with links to the online materials.

All of the lightning talks were powerful, each with a unique message. George’s talk was actually delivered via Youtube, due to an emergency change in his schedule. Audio recordings of the other two talks will be uploaded here in the coming days. Both Kirsten and Stephen’s talks inspired questions from participants, and Kirsten even took the opportunity to modify her prompt question on the spot. 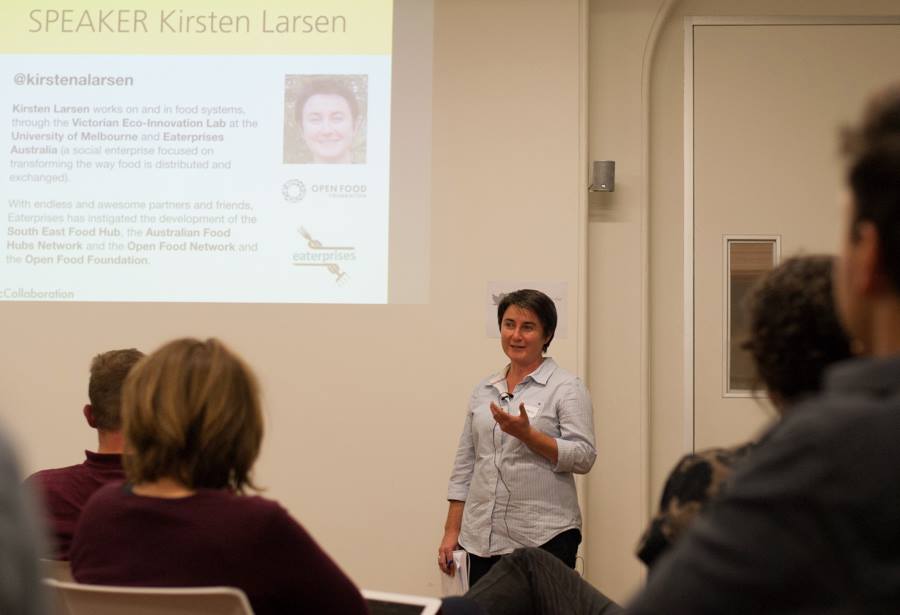 The group discussions between each talk were lively, and the groups submitted responses to the online form with a minimum of fuss (though a few notes were lost along the way). We also took time at the end of each discussion to get a sentence or two of verbal ‘report back’ from each group. 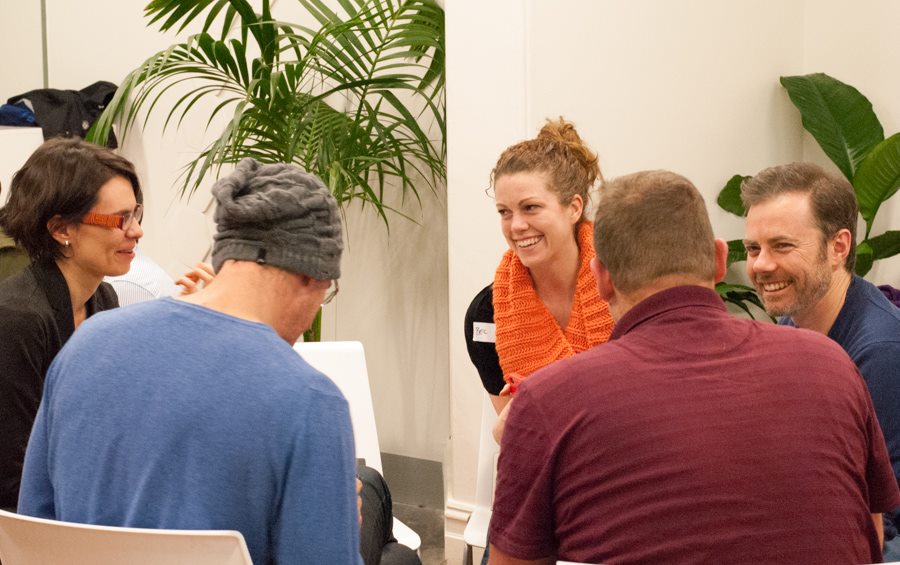 While this was going on, Mark Elliott was busy capturing all of the form submissions and loading them into a single Google Document, which can be viewed at bit.ly/CrowdCollab_Outcomes.

Mark then took the submission content for each question, and processed it using the Wordsift word cloud generator. 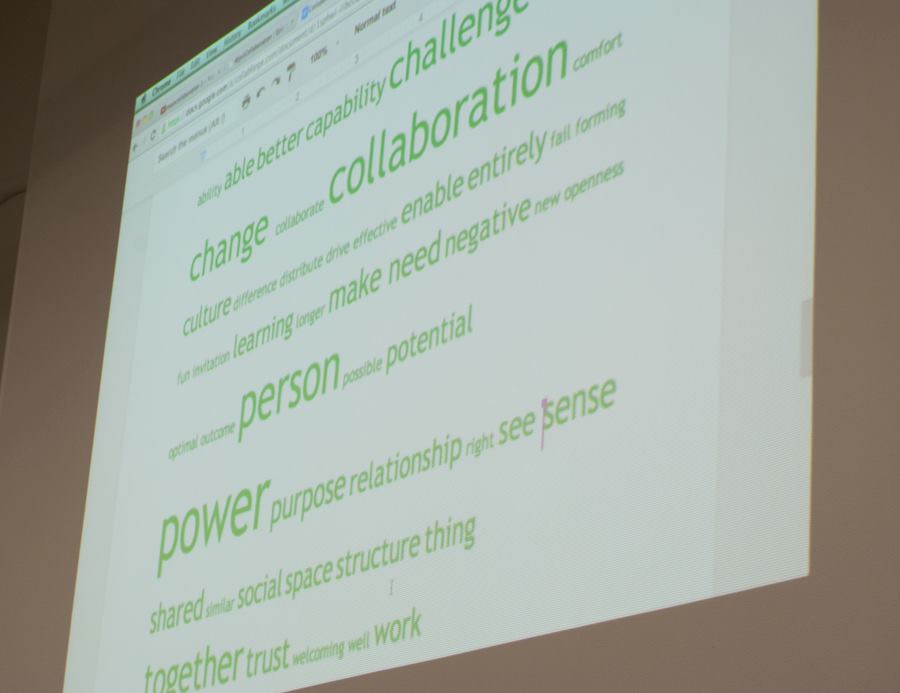 Mark used the word cloud, as well as the original text, as inspiration to synthesise a single response for each question.

How it wrapped up

At the end of the last discussion, Mark revealed the Outcomes page to the participants, and took them through his process. Appropriately equipped participants would have had the opportunity to directly edit this document, and add to Mark’s synthesis, but it doesn’t appear that anyone did so.

The digital capture did however provide participants an opportunity to reflect on the overall themes of the event, and for the outcomes to be accessible beyond those in the room.

We closed the night be inviting participants into a single circle to discuss the event. During this valuable time, we learned a lot about the participants’ expectations and perceptions of the event. Some had hoped for more ‘actionable insights’, while others expressed a desire to ‘work on some real problems together’. Overall, the participants voiced that they had enjoyed the event, and learned a lot, even if it did not meet their expectations in every case.

A new collaboration is born!

One great outcome was when Kirsten Larsen offered up her current Open Food Network crowdfunding campaign as a challenge worth working on together. A number of participants agreed to meet at 6pm on Tuesday night at Hub Melbourne to help Kirsten strategise on getting the best outcomes from their campaign (details included in this newsletter, for any who want to join).

It became clear as well that many of the participants hadn’t previously learned much about the purpose of Epic Collaboration, and were mainly attending based on what they read on the meetup.com website. One participant even suggested we create a place to share learnings about collaboration! Needless to say, we took time at the end to provide more detail about the EpicCollaboration.com vision and approach, and to show them the materials currently available in the library.

We also asked participants to fill out feedback forms, the results of which we have compiled into the following pie charts: 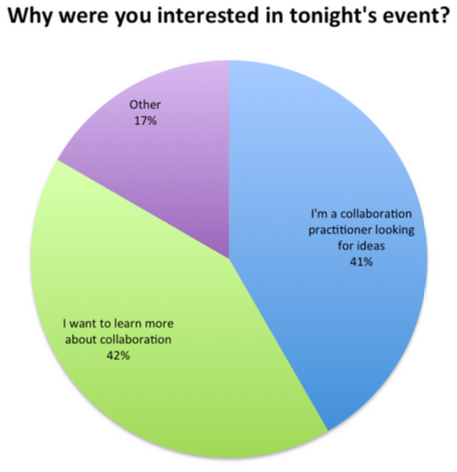 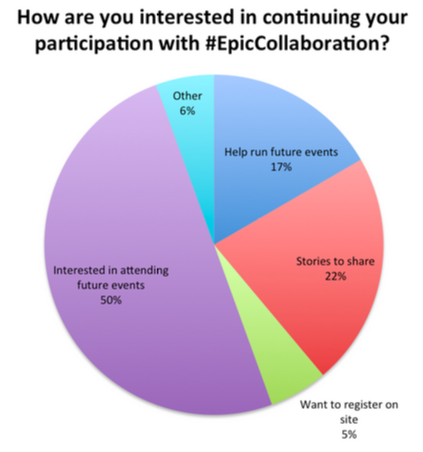 The event provided a number of valuable learnings for the Collabforge team, and reinforced some other emerging insights:

Overall, we feel the event was very successful. We’re heartened by the enthusiasm, generosity and goodwill of the participants. We’re going to take some time to work out the next event idea, and definitely involve more of you in its design (and be less in a rush when we do so!) We’re aiming for another event at the end of July.

In the meantime, you can help by: