A story about cocreating a new coworking space in Sydney, and how different participants gravitated towards different aspects of the process.

The challenge: To bring together hundreds of people across diverse sectors to find new ways of connecting and establish a coworking space in Sydney
Collaboration scale: 3-500

Hub is a coworking space which takes a different approach to establishing coworking spaces: putting the community at the centre of the design, and ensuring the outcome fosters a sense of ownership in and by the community for which it is established. Caroline McLaren from CoActiv8 worked with a core team to set up Hub Sydney, to nurture a collaboration with the public and local business community in a collaboration that emerged over 6 months, enabling a launch by the mayor in May 2013.

Hub Sydney was envisioned to be a beacon for innovation and creativity, particularly in social change and environmental spheres. Engaging a community around this concept was initially challenging, however, with defined silos existing amongst social entrepreneurs, design groups, and sustainability innovation groups - even the School for Social Entrepreneurs and the Centre for Sustainable Leadership weren’t working together. The immediate need was to build a cohesive narrative about why these groups should collaborate.

Co-creation workshops formed the backbone of the collaboration, bringing people into a shared space where they could be encouraged and given permission to discuss what they wanted to see come out of the Hub space. Initially these centred on the central vision and the physical space, but as decisions about the space were made, these shifted to discussions about how the space might be used and how this would benefit the community.

Contributions from all those who attended the co-creation workshops, were dutifully captured, communicated back to participants after the event, and used as a jumping off point for subsequent meetings. This process included a blog communicating the Hub Sydney journey. This process was important to ground the co-creation journey and allow a real sense that contributions were valuable, had purpose and became embedded in the Hub’s design. This was especially true where feedback related to aspects of the project which were not considered open for collaboration such as financial decision-making. This process helped to alleviate symptoms of co-creation ‘burn-out’ which are regularly seen in those who regular participate in this style of design if they sense their time is being wasted and the process is a token gesture that will not change a pre-determined outcome. Coactiv8 wanted to ensure a genuine and open process. 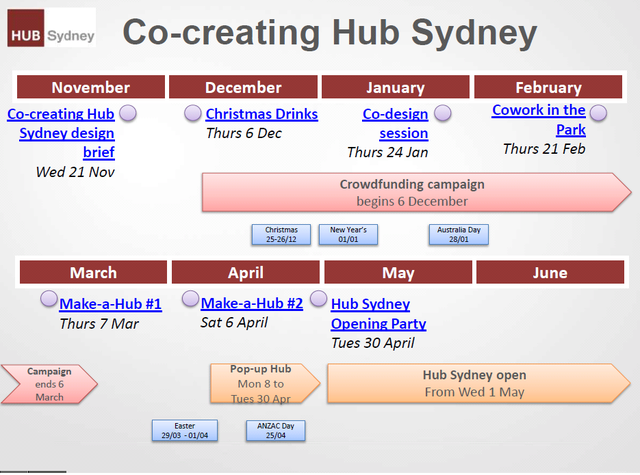 Coactiv8 found that throughout the process there was a distinct range in willingness of individuals to participate. Early on there was a cohort who were able to be motivated by a conceptual project, and later, when the physical space was being worked on, some of these drifted away, being replaced by a number who wanted evidence of something tangible before they were willing to commit time.

There was a similar lesson in the degree to which collaborators wanted to participate. Caroline was surprised how quickly the collaborating group would erode to a small core when the work became more involved. Coactiv8 were also surprised by the level of explicit permission to act most people required to become involved, often needing clear instructions on how and what to collaborate on. This caused Coactiv8 to reflect on how to bring people into a collaboration based on the phase at which they felt they wanted to be involved, or perhaps ensuring they only give what they are willing to share to avoid burnout.

Having a date for launch by the mayor pushed the collaboration and activity toward meeting that deadline, and the Hub launched strongly, bringing further interest from some parties who were keen but waiting to see what would launch. The collaboration successfully brought a distinct Sydney flavour to the Hub and ensured a space which could bring together formerly siloed, like-minded groups to work, met or run events.

Hub Sydney is open in Darlinghurst. You can read more about it or join here - http://hubaustralia.com/spaces/sydney/