The challenge: To create a strategic plan which balances the interests of a number of often competing community groups
Collaboration scale: 10-500
Public consultation is a regulatory process whereby input from affected members of the public is sought to ensure efficiency, transparency and public participation in decision-making on large-scale projects, planning or policy/law-making. Government bodies traditionally utilise methods of notification and consultation that seek out opinions of members of the public using requests for submissions, focus groups or surveys to gather feedback. These techniques are used as they are well-understood, easy to set up and deliver, and have predictable turnaround times for data processing. This traditional notify-and-request-feedback style of public consultation often comes under attack for not providing the level of transparency and involvement intended - especially where methods are used which do not allow for a representative sample of the community.
In 2009, Parks Victoria became the first of many organisations to build on the success of 2008’s world first FutureMelbourne CityPlan that Anyone Can Edit. The use of online platforms and tools for parks management planning was a natural fit, as it addressed critical issues with diverse stakeholders spread over a large geographic area. While Parks Victoria sought to continue Future Melbourne’s use of wikis for the cocreation of public policy, they also brought significant innovation to the approach. 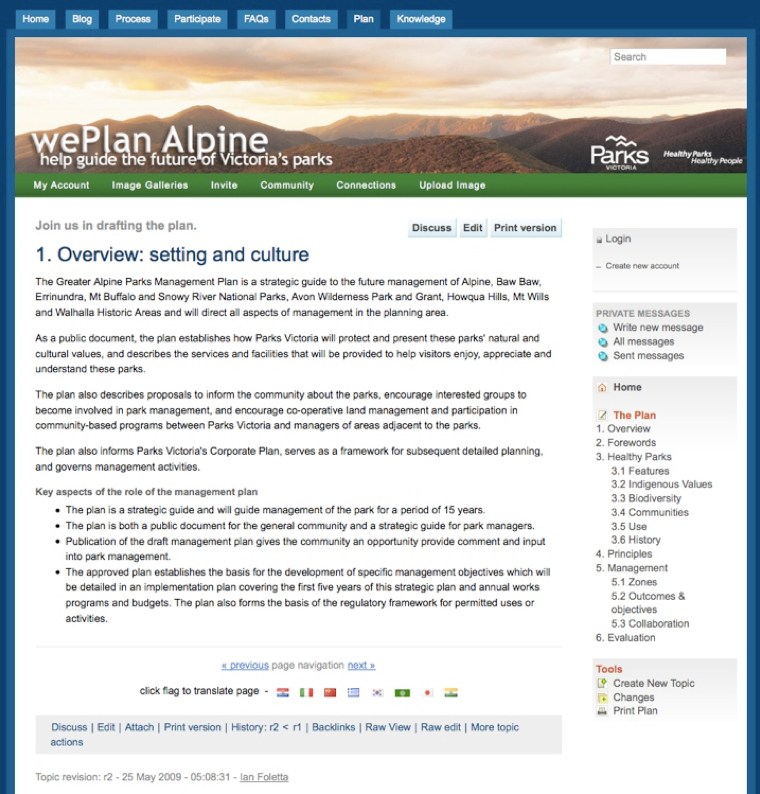 Parks Victoria’s first foray into online collaborative planning was a Parks Management Plan for the Alpine region. This set the stage for future online engagements.

As part of the wePlan Alpine platform, Parks Victoria used the Drupal open source web framework to deliver a suite of features that added a social layer to the wiki-based planning process:

While none of these features was individually groundbreaking, it was unusual at the time for a government agency to provide such an integrated suite of features in support of a community-driven and collaborative approach to online consultation.

A blog was maintained throughout the process, providing a consistent communications and engagement channel. By starting the blog well in advance of the formal consultation, the team was able to generate early community interest, and test their thinking.

Unlike the FutureMelbourne plan, Parks Victoria regulations did not allow them to change the content of the plan for the duration of the formal 60-day public exhibition period. This meant that wiki editing would not be permitted during this period. Instead, the team opted to use the wiki before the formal period, to generate the draft plan, and after the formal period, to transparently integrate community input from offline channels.

This savvy integration of new tools with existing approaches was made possible by a highly capable and dedicated project team within Parks Victoria. The team demonstrated willingness to engage the unknown and go on a learning journey, as well as ability to communicate with influence between levels of the bureaucracy to ensure initiatives were both strategically and operationally aligned. Parks Victoria’s existing culture of openness and trust meant that Collabforge was able to focus its efforts on supporting their innovation process, and on delivering the specific strategies, tactics and tools required.

Parks Victoria is responsible for thousands of different parks and places throughout Victoria, as well as more than 28,000 assets. They saw an opportunity to scale the success of the wePlan Alpine consultation by enabling multiple simultaneous consultations on a single platform.

This led to the develop of the wePlan web suite. Not only would this save time and resources in terms rolling out new sites for each consultation, but it would also enable participants in one consultation to use their same user profile to engage in multiple consultation s of interest.

The new platform was used successfully for a blog-driven consultation for Point Nepean, and the ‘Truth in Art’ photography competition.

The learnings and outcomes from wePlan helped Parks Victoria to win major funding to redevelop their entire online presence around a proposition of improved participation and access to information and data. The new ParksWeb platform provides a one stop shop for all Parks Victoria information, an single list of all current and future parks consultations, and integrated mapping. 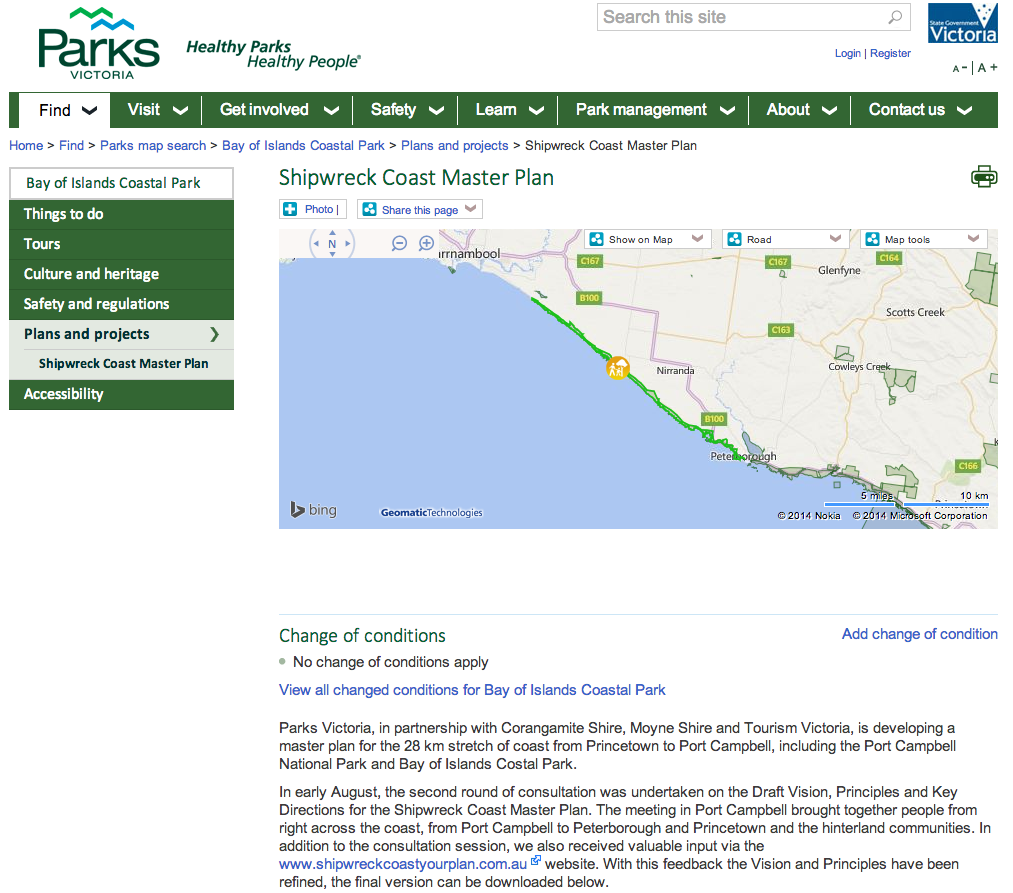 wePlan was also ‘spotlighted’ as part of the 2010 Federal Government Gov 2.0 Taskforce activities:

wePlan Parks breaks new ground as the first instance where social media has been used to engage with the public in guiding the future of Victoria’s parks. It was inspired by the City of Melbourne’s Future of Melbourne wiki and by a desire to reach a wider audience in real time throughout the life cycle of developing a park management plan. Parks Victoria is using wePlan Parks to complement existing citizen engagement and public consultation approaches.

Mark Elliott and the Collabforge team provided Parks Victoria with the strategy and solution for a planning web 2.0 application. The Collabforge team generates innovative ideas and have created a professional on-line environment in a timely manner. I would recommend their services to all organisations.

The wePlan story demonstrates how a willingness to embrace learning by doing and take risks, can lead to transformational change in the long term.

Patterns expressed by this story:
Commitment must be top-down and bottom-up
Embrace agility and action learning
Mapping the system
Set initial conditions